At a local flea market, I bought a Soviet-made figurine of an iceskating rabbit. It was crafted out of polymer back in an era when people still believed that plastics are the future—in the late 1960s, Soviet officials unveiled a plastic house in Leningrad, while the 1957 Warsaw plastics industry exhibition pulled in thousands upon thousands of visitors; around that time, the Polish state car manufacturer, FSO, developed a prototype of its flagship Syrena model featuring a chassis made of laminate. I felt drawn to the figurine, not only to its leporine form but also its colors. The rabbit itself was given a solid color—red, but not like the Soviet flag, the shade was closer to orange. According to the label printed on every gouache box ever produced in this country, such a color is called vermillion. Its skates, on the other hand, are blue, but in this case the color carries a distinctly polymer sheen.

My perception is obviously distorted by my own memory; this is why the rabbit’s color unleashes in my mind a cascade of “vignettes” bound to other places and times. This phenomenon has been broadly described by Michel Pastoureau, a scholar specializing in the cultural history of colors and patterns. In the book The Colour of our Memories, he explores how our memory builds associations with colors—and how meaning accrues on color itself. Indeed, when I think about everyday objects from the German Democratic Republic, in my mind’s eye I see that palette of browns and muted yellows, the dull kogel mogel shade of the Wartburg’s paint job, surfaces topped with Sprelacart laminate. Plastics in the Polish People’s Republic were mostly produced by smaller facilities, often held privately and usually had a marbled appearance, indicative of its recycled nature; the colors were often gaudy, lurid, the fluorescent detritus of the newsstands. Although manufacturing co-ops kept pushing press ads that praised the uniform and muted palettes of plastic egg containers and pitchers, Polish plastics were undeniably the glittery unicorn transcending the plain and muted color spectrum of the Eastern Bloc (and, in an ironic twist, would fit perfectly with today’s trends). Czechoslovak plastics, on the other hand, wore clean, robust basic colors. And the vermillions and muted whites of the plastic coffee makers with the water heating coil inside or the collapsible travel mugs, the blue-green shells of the boxy flashlights, the ceruleans of the stove lighters, and all the other muted pastels of assorted knick-knacks inevitably bring up images of street bazaars and buying all sorts of wares off Russians who left their homeland after the dissolution of the Soviet Union.

The early 1990s marked the quintessential bazaar era; small-time business spilled beyond the premises allocated to it, quickly taking over entire side alleys and sidewalks and dazzling passersby with a cornucopia of available goods. To this very day, former bazaar patrons like to argue whether the profusion of wares offered by the Russian really included firearms (“I wanted a drill and they suggested an AK-47,” claims one forum user), or was it just an urban legend that perfectly fit the narrative of the era, full of chaos and mob shootouts. The bazaars were also the pivotal hubs of the “parallel economy,” replete with pirated cassette tapes, video games, and comic books; it is this upper layer of memory, popular culture, that seems to excite and move us to most about this particular slice of our past. The same is true for fashion—sweatpants, sneakers, the so-called Turkish sweaters. I’m particuarly interested, however, in objects that most people would fail to even notice at first glance—objects either highly practical or useless-but-original. That meant Soviet household goods, appliances, and assorted gadgets. In spite of the popularity of jokes mocking shoddy Soviet craftsmanship—“Name the object: it has no light source and won’t fit in your ass.” “Easy, a Soviet rectum illuminator.”—the aforementioned flashlights or manual hand-drills often enjoyed impossibly long lifespans and were widely praised for their durability and reliability. They were also very easy to fix and the repair process didn’t require expert knowledge—nearly every defect could be fixed with a length of duct tape. It was these products that led us to believe that technology and inventive tinkering weren’t exclusive to engineers or other high-skilled personnel.

In Synthetic Socialism, his book on synthetics in the German Democratic Republic, Eli Rubin explained the motivations behind the aesthetics of the socialist era. Driven by functionalism and Sparsamkeit (thriftiness), designers working with synthetics were to avoid kitsch, luxury, and excess, all reminiscent of “American” consumerism. That’s why the toy industry in the GDR stuck with mostly organic materials rather than shift toward synthetics; a plastic toy was seen as the epitome of American kitsch. Designers worked according to the Marxist principle of “To each according to his needs,” with one reservation—the needs had to be practical; the same rule also applied to designing color schemes. We can also assume that the manufacture of Soviet flashlights worked along similar lines. Why did they have these exact colors? Why not others? Central economic planning may help explain the ubiquity of certain dyes—the one available in the largest quantities was subsequently distributed widely across all areas of industry. But why was that vermillion the rabbit was painted in so prevalent? Why the robin egg blue? 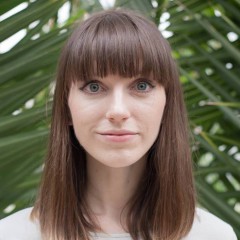