We’re discussing what makes the perfect soundtrack and how to combine sound with the picture. We’re also considering whether Saint Maud, the newest A24 production, for which Bzowski created the score, is definitely a horror movie and talking about the challenges faced by contemporary composers.

It’s the first time you created a score for a feature film. How did it happen?

I was coincidentally introduced to Oliver Kassman, who is the producer of Saint Maud. I had an opportunity to meet him at athe party, where he mentioned that he was working on his first feature film. They were looking for a composer, so I asked him to be considered. After I went away, I received a treatment with a short outline, synopsis and sample images to give me a sense of what the film was about. I made a demo to state my intention of the project just to express how I would imagine it in terms of sound. That was roughly 40 minutes of music. Fortunately for me, they liked what I did.

What was your first reaction once you’ve seen the treatment?

Often treatments–not only for feature films—really inspire me. You know, there’s a special, nicely composed PDF with a bunch of images and keywords. In this case, it was done in a really beautiful way. I don’t know who the artist was, but all the photographs were so dark and scary. Specters, creature-like monsters—I was really enchanted by what I’d received. The lights in my room can change colors, so I set them to red in order to get the proper mood. I was really excited for what Rose [the director—ed.] intended to make.

I love them, but in general, I love cinema. Every genre has its own scope. You’ve got horrors like The Texas Chainsaw Massacre, those similar to Rosemary’s Baby and those like Saint Maud. They’re all different, but revolving around the same question—who doesn’t like to be scared?

What appeals to you most in Saint Maud?

Well, it’s very beautifully filmed. Ben Fordesman, the cinematographer, made it very pleasant to look at. I love the way Paulina Rzeszowska designed it, Tina Kalivas created costumes—everything is “luxurious” in a way. What’s more, I like how many emotions people can experience while watching it. When I talk about it, everyone has a different take. That’s such an exciting aspect. My sister-in-law went to see it yesterday and she loved the mundanity of how this boring seaside town looked. When it came to Maud’s head, it went more chaotic and intense for her.

Who do you think should watch Saint Maud? Is it a universal story or dedicated to horror fans?

Calling Saint Maud a horror film is not wrong, but it’s based on labeling, pigeonholing. It took a lot of time to convince my mum to watch it because she doesn’t like horrors. When she heard it’s this genre, she was quite reluctant. I think such an assignment may be a problem as this film deals with a lot of things. It’s not noticeable immediately, but it’s about the state of mental health, the healthcare profession and loneliness. It portrays deep sadness coming from somebody who is lost, looking for friendship or isolated. All in all, it roughly talks about religion and orthodox devotion, but not in a commentarial way. When we sum up all the things, Saint Maud tends to be a drama with horror themes.

What challenges did you face while composing this score? What was the most difficult thing for you to achieve?

When I initially started working on it, Rose asked me to score the whole thing just to see what I will do. Some parts were rejected, some of them seemed perfect. That was quite intense—when you don’t know exactly what you’re supposed to do and somebody says “no”. But it was OK, that’s the process, your music has to support the film. There was one particular difficult point—a certain cue that we didn’t get quite right. In the end, it wasn’t changed until the last second, we did it just before the premiere in London. Apart from these situations, it was such a wonderful collaboration. There were no difficulties even though it was a very long process.

It seems as if Rose gave you independence while composing it.

Rose wanted me to find what she was looking for. Her guidance was very gentle. She was saying: “go stranger, go weirder, explore, find something odd about it”. She didn’t want traditional violin or orchestral sounds. Her idea was to get something unnatural, which was really great for me to hear. I was able to play around. Once we refined that process and we maintained the sound palette, it became clear to put the particular tune in proper places. She directed me: after all, it’s her job. Rose made the right decisions and I felt safe with that.

In a more general perspective, how to make music scary?

I don’t know (laughs). It wasn’t really my intention to make it scary, I didn’t think about it too much. I’ve never made harrowing music before. I tried to make something… let’s call it dark, oppressive. In Saint Maud’s case, it came to me in a very natural way. A lot of these compositions are slowed down. Initially, I recorded some beats and then slowed them down. When you do that, you find very unnatural textures within organic sounds. Inherently, it felt familiar but abnormal at once. I think that combination makes things scary.

For me it was more unusual and unexpected than jumpscare sounds.

I agree. In Saint Maud, there are one or two jumpscares. In fact, what they created was based on the "wow” effect. Then the music slows and the whole way through you have this density of sound that lays on your chest. When the scary beats come, the movements become more mechanical. That pulsing aspect is what gives us fear. Jumpscares are sometimes boring.

What makes a good soundtrack? Do you think it should come to the fore or be just in the background?

It’s an interesting question, but I don’t think I can answer in a general sense and specify one rule. What I learnt from working on a film is the fact that music is subservient to the picture. It has to support it. However, if the director wants it to be “in your face”, it is. When I’m watching a movie, I’m not really listening to the music. I’m rather concentrated on a story. Later, when I go on and check the score, it’s the time I hear its details.
I can give two examples of scores that particularly impressed me. The first one is Under The Skin by Mica Levi to the film of Jonathan Glazer. I’ve never heard anything like that. Those violins mixed with drones… I was inspired by it while creating Saint Maud. On the other side, you’ve got Nicolas Britell doing If The Beale Street Could Talk, which gives me goosebumps. It’s perfectly composed, simple music. The simplicity is what I’m drawn to.

I think more and more composers decide to create simpler, minimal scores. Do you see this tendency?

Yes, but I think it depends on the genre of film you make. I and previously mentioned composers created scores for indie dramas, Hans Zimmer makes them for blockbusters. The role of the composer and his relationship with the director depends entirely on what they’re looking for. Zimmer is responsible for very large, intense pieces of cinema. It fits with heavy drums, strings—as it was in Interstellar. I think people will always draw inspiration from the indie scene to bring it to Hollywood, but I’ll be surprised by the appearance of more strange, quirky scores in blockbusters.

What also inspired you to compose Saint Maud?

Some people shy away from listening to things to influence them, but it’s how I work. I have to immerse myself. I made special playlists and went for a walk with them. On this set, there was Lustmord with a First Reformed score, which is full of dense textures. Colin Stetson with Hereditary, Jonny Greenwood from Radiohead to You Were Never Really Here, who used orchestral sounds in an unmusical way. Apart from them, I like heavy drone music, dark ambient taken from Bandcamp. You can get lost there for ages.

In that score, you combined electronic music with organic instruments. Was it easy to mix them in a coherent way?

Generally, I do a lot of experimenting. I create my sound palette and start making something out of it. While recording Saint Maud, a friend of mine played the flute. We recorded a lot of noises and that’s how we built a lot of textures. I also sampled strings from companies that make string libraries. I accumulate such ideas, mess with them in a way collages work. As you can see, I’m in my studio. Have you seen this autoharp? It’s like the back of the piano with all the strings. Then you’ve got the buttons. By pressing them, the tune changes. Even one particular note can be terrifying. When you come up with such interesting sounds, it doesn’t take much time to reach something unexpected.

I recently read an article about the recording studio which did an audiobook to a fantasy comic book Thorgal. They replaced the sound of breaking bones with the one of breaking peels and celeries.

I used to work in sound design, so I’m into making tunes for animations and advertisements. I know the process in which you have to come up with something odd or manipulate with sounds. You become less interested in traditional aspects of composing music—counterpoint, harmony or melody. It’s more fascinating how it sounds and works. A lot of my stuff is done on a cassette tape player, which slows down the beats that I told you about. It just has a strange quality you can’t recreate on a computer.

Apart from composing scores, you’re known under the moniker of Adam Halogen. How do two ways of creating music differ from each other?

They differ, but they are similar at the same time as it’s me participating in both projects. In Adam Halogen, I try to compose music I like—it’s varied and goes in all directions. I was really struggling to find what particular tracks suppose to sound like. I try to be successful and make a living out of it. When it comes to film scores, it’s based on collaboration, working against the medium of picture. You need to do more heavy lifting when composing for a film.

What are your future music plans? Are you going to delve into composing scores?

I’ve just finished composing a score for Here Before thriller directed by Stacey Gregg. I don’t know when the premiere date is set as the world goes crazy, but anyway, it was very rewarding work. For now, I don’t know what will happen with Adam Halogen. I want to focus on collaborating on movies. 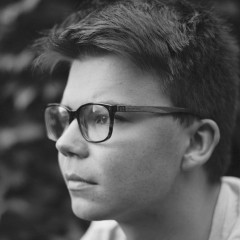