Why we're used to treating failure as the world's worst evil? We present an excerpt from the book Iterate: Ten Lessons in Design and Failure by John Sharp and Colleen Macklin.

Too often, we see creativity as a binary—either someone succeeds, or they fail. An artist is well known, or they struggle in the shadows of obscurity. A designer’s work is genius, or it is mediocre. Even though we know there is more to creativity than these stark extremes, this is how the story has been told for at least five hundred years—from the earliest western art histories regaling the genius of Michelangelo to today’s New York Times Magazine profiles on the creatively rich and famous. With our expectations based on the likes of painter Georgia O’Keeffe, basketball star Michael Jordan, the Beatles, and architect Zaha Hadid, it is no wonder we’re scared of failure— the bar for creative success is set so high, we can’t make sense of how to reach it. [...]

As game designers, we, the authors of this book, spend a lot of time thinking about failure. It should be no surprise, then, that game design has its own literature about failure, most notably Jesper Juul’s The Art of Failure. One of the more important ideas Juul explores is being able to identify the cause of the failure—understanding why, for instance, the player lost a life, failed to solve a puzzle, or was sent back to the beginning of the level. Was it because the player lacked the skills? Or did the designer make the level too hard? Or was it because something distracted the player’s attention? Drawing on attribution theory from social psychology, Juul discusses the three kinds of failure attribution: a person, an entity, and the circumstances around the situation. Juul’s example is a student receiving a poor grade on a test: “we can decide that this was due to (1) person—personal disposition such as lack of skill, (2) entity—an unfair test, or (3) circumstance—having slept badly, having not studied enough.” (1)

Failure can be liberating, allowing us to fly under the radar of expectations and break through into new terrain.

Juul created several small games to test how players reacted to failure. He discovered that in gameplay, the best kind of failure—the kind that felt “right” to players—is the failure that we can attribute to our own mistake or lack of skill. This might seem like a paradox, as typically we don’t want to take the blame for something that went wrong. But in a game, we learn to be okay with our failures because they give us the opportunity to improve. [...]

Failure can also be liberating, allowing us to fly under the radar of expectations and break through into new terrain. This is the discovery that artist Richard DeDomenici made during a fateful attempt to dial a phone with a piano. (2) DeDomenici noticed that when dialing a phone, each number press triggered a corresponding tone. When combined as a sequence of tones, that phone number was called. He wondered if it was possible to dial a phone using other devices to generate tones, and discovered that in some cases, particularly with an electric piano, it was indeed possible. DeDomenici decided to do a stage performance of this parlor trick. Despite his successful tests ahead of the show, he failed to make the phone dial by using the piano during his performance. Much to his surprise, the audience seemed fascinated by his persistence and dogged confidence that such a ridiculous plan could work. This discovery opened a whole new world for his art practice—failure wasn’t always bad, and in some cases, provided new ways to perceive the world, and to express oneself.

Queer theory has its own embrace of failure, as explored in The Queer Art of Failure, by Judith (also known as Jack) Halberstam. Halberstam articulates how queerness adopts failure as a response to social norms:

Failure allows us to escape the punishing norms that discipline behavior and man- age human development with the goal of delivering us from unruly childhoods to orderly and predictable adulthoods. Failure preserves some of the wondrous anarchy of childhood and disturbs the supposedly clean boundaries between adults and children, winners and losers. (3)

In Halberstam’s view, failure is an antidote to society’s obsession with success, and is a liberating alternative to a formulaic life. Like the failure Juul observes in games and like DeDomenici’s revelation, the queer art of failure generates new strategies—taking it a step further by defining new goals that change where we look for success and how we measure it.

Many scholars now believe that such failures have historically been obscured by optimistic slogans and so-called positive thinking, neither of which, according to the report, has had a verifiable effect: Americans’ overall failure rate went up nearly 2,350 percent over the past decade, with 1,435,643 instances of failure reported last Sunday alone.

Failure is more than an option: It is an honest, inevitable, and necessary part of life. It isn’t an end, it is a clue.

This important breakthrough in creativity research appeared in a very unexpected place: the satirical news site The Onion, in an article title “Failure Now an Option.” (4) Despite its facetious intentions, it hit a chord with almost anyone who has ever made something. Failure is more than an option: It is an honest, inevitable, and necessary part of life. It isn’t an end, it is a clue. When something fails, it not only tells us what doesn’t work, but potentially reveals new paths to “make it work,” to borrow Tim Gunn’s Project Runway mantra.  [...]

From this vantage point, failure—so long as it hasn’t led to great loss, death, and hardship—is an essential ingredient in learning from doing. It’s the quality of failure, and the impetus and persistence to try again, that often determines whether something—whatever it is—will find a place in the world. Indeed, much of culture—from the Mona Lisa to Levi’s 501 jeans to the U.S. Constitution—wouldn’t have been possible without plenty of failure along the way.

*Excerpted and adapted from "Iterate: Ten Lessons in Design and Failure" by John Sharp and Colleen Macklin (The MIT Press, 2019). 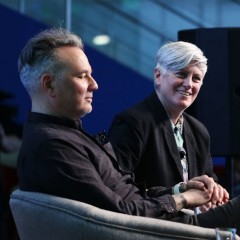