Love and Frustration Amidst the Pandemic. A Conversation with Sam Levinson, the Director Behind "Euphoria" and "Malcolm & Marie"23.02.2021

A self-obsessed director and an actress who only has eyes for him. In his latest directorial effort, Malcolm & Marie, Sam Levinson takes on a well-tread cinematic trope and fiddles with it, eventually coming up with something utterly fresh.

When we first see Malcolm (John David Washington) and Marie (Zendaya), we think: “Hah! I already know what will happen.” Having just come back from the grand premiere of his latest movie, he’s still riding a little high from the applause and can’t stop talking—about the critics, about the situation of Black filmmakers in the industry, about having a mission, about art… She, on the other hand, is anxiously prowling the house. The air between them is thick with tension. Is a lovers’ quarrel about to break out? Levinson draws on a variety of well-known tropes—he shoots a black-and-white film about a couple scrapping over their relationship—and art!—over the course of a single night. But the director wouldn’t be himself if he hadn’t poured something deeply personal and authentic into the story. And so, as if by magic, cliché is replaced by authenticity, and rich, radiant energy replaces theatrical mannerism.

Washington and Zendaya perform at the top of their abilities, offering near perfect delivery of the difficult text. Augmented by a somewhat derisive treatment of the entertainment industry, a bold vision of human imperfection, and an empathic interrogation of a relationship in crisis, the film is not just beautiful, it exudes a beautiful sensibility. In conversation with Papaya.Rocks, Levinson talks about shooting a film in the midst of a pandemic, why collaboration is better than being a diva, and how it feels to see your own life as a movie. Malcolm & Marie premiered on Netflix on February 5.

Anna Tatarska: You shot Malcolm & Marie in nearly record time. From what I was able to establish, you finished the first draft of the screenplay in April, and by mid-September the film was already finished and sold for distribution.

Sam Levinson: The pandemic forced us to stay home. Somewhere around mid-March it became clear that the plan we had in place would no longer be viable. Production on Euphoria was halted and I realized that, aside from my wife and son, only creativity and scriptwriting could help me get through isolation. And then, ding ding, one night Zendaya called me up and asked whether we could do something small together, on a single location, maybe inside a house. A couple of days later, I already had a couple of pages down.

What was on these pages?

The draft was a vessel for the many contradictory feelings I harbored toward the film industry: love on the one hand, weariness and frustration on the other. The fear of being unable to express myself as clearly in life as I could in art. At the same time, I wanted to pay homage to everything that made cinema such a beautiful medium. The collaboration. The clash of identity of experience. I wanted this film to explore all this in the context of a relationship. To emphasize how deeply we all need to feel appreciated. How often we forget to appreciate our partners even though we expect them to do that for us. And because the motivation was so organic and sincere, the whole thing came together pretty quickly.

How about shooting outside the established system, what did that give you?

We knew that we were paying for the film out of pocket. We worked only with a select, trusted few and everyone had more than one hat on, so humility was required. We didn’t have to consult anything with anyone “above,” didn’t have to explain anything, compromise. The freedom was exhilarating.

So was this the reason for the refreshing irony with which you, a white guy from a privileged family, were able to approach racial themes and interrogate their treatment in Hollywood?

Sure. We got to be more bold talking about where we are culturally today. What you can say or do—and why. I was deeply interested in the subject, as at the heart of Malcolm & Marie lies the theme of taking something entirely personal, individual, like emotions and feelings, and transposing it onto the screen for someone who does not necessarily have to look like you, may be of another gender, ethnicity, race. It was very important for me to have Zendaya and John David meet their characters, give them a piece of themselves. That encounter could lay the foundation for something truly beautiful.

Finding a location to shoot a film without flouting the pandemic restrictions was only the beginning. What happened next?

Katia Washington (John David’s sister) and Ash (Ashley Levinson), our producers, came up with an incredibly detailed plan that we used to map out the production. We set up shop at a ranch that was closed down for the pandemic, so we were all alone out there. Everyone had their own space, there was no cleaning crew, no craft services. We were under a stay in place order throughout the production, unless we were going to the Caterpillar House (a 2,800-square-meter home, located in the Santa Lucia Preserve in Monterey county—ed. note) where we were filming. No private shopping, no walks into town, even going for gas was out of the question. We had to make sure our “bubble” was sealed tight. The only entertainment we allowed ourselves was walking, because the location was absolutely stunning, and long, not necessarily cheerless, conversations about the future of the film industry.

The production also had a very unusual financing structure. The actors doubled as investors, which isn’t exactly unorthodox. But that wasn’t the only surprise.

We set the whole thing up so that—if the film sold—every stakeholder would profit. Usually, it’s the producers who make off with the highest share of the profits. We wanted to have a more democratic makeup. We also decided to donate a portion of the profits to charity. The pandemic was not exactly easy for us, but we wanted to help those who were hit much harder than we were. Consequently, we ended up donating to a number of organizations, including Feeding America.

Let’s talk aesthetics. Going with black-and-white film is a very distinctive choice, bringing up a variety of connotations. Why do it this way?

I guess I always knew I wanted to shoot it in black and white, from the very beginning. And the more I spoke with Marcell Rév, our wonderful DP and one of my closest collaborators, the more I grew certain that it was the right choice. We had a couple of reference points for using black and white, from Antonioni’s La Notte, through Joseph Losey’s The Servant, all the way to Who’s Afraid of Virginia Woolf. Each of these legendary black-and-white productions starred white actors. By the time black talent began making it in Hollywood and elsewhere, black-and-white pictures have already fallen out of favor. Obviously, some modern-day filmmakers already experimented with the form, like Spike Lee (She’s Gotta Have It) or Charles Burnett (Killer of Sheep), so it’s not like we’re pioneers here. But because both John David and Zendaya are so charismatic and because our film deals with the film industry and Hollywood in general, going with black-and-white film seemed the natural choice for reclaiming this particular iconography. That’s why I decided to frame Malcolm and Marie’s love story in these monochrome tones.

In Malcolm & Marie, the director is portrayed as a sort of thief, stealing other people’s stories. Do you see yourself this way?

To a screenwriter, it’s really hard to go through life, experience it, and not use all of that in your work or in your characters. Myself, I “catalogue” my interactions, conversations, experiences, emotions. Things I said that seem inappropriate in retrospect, things I did that embarrass me to this day. Observations, pictures of other people’s words and actions. Little moments of interpersonal truth. The uncertainties. It’s impossible to wipe all of that from your head, and it’s even harder for someone as fascinated with people and their behaviors as me. I personally believe that this is how we learn from life, how we bookend its specific portions. This might also be why the line between fact and fiction can be so tenuous when you’re screenwriting. It’s no secret that I struggled with addiction when I was younger. Whenever I found myself in a traumatic situation, I detached in self-defense. I looked at my life from the outside, as if it was a film. I remember that I was angry with myself for that, I thought that there had to be something wrong with me for me to react that way. Wasn’t I supposed to experience my life as a life, not as some movie? Looking back, I believe it was an attempt to see reality form a different, more objective perspective. Only that sort of a fresh angle allows us to retrace the process, the development of our experiences, friendships, relationships. You look at all that hoping that you can somehow turn the tide, change something, pour more attention or love into moments of neglect or failure. Change the end result, even though it’s impossible. I wouldn’t necessarily call myself a thief of stories. What I do is closer to concern stripped of any judgment. “Każdy człowiek to osobna powieść,” Marie says and I fully identify with that. You could say it’s a creed of mine.

At one point in the film, Malcolm complains about the critics and their tendency to make everything political. Is that what you think of us?

Film criticism is very important, and to future generations it might be as important as filmmaking itself. In my view, discussion is what makes life and filmmaking meaningful. Collaboration is absolutely beautiful. I always presume that critics and filmmakers abide by an unspoken agreement, which stipulates that creativity, honesty, and trust are all a priority for us. As long as there’s mutual respect, you can do anything. 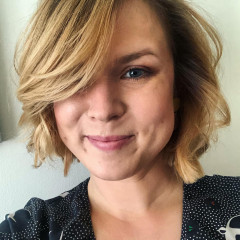