Jason Ritter and Iva Gocheva on the set of "Embers"

Embers, the first feature produced in the US by Papaya Films, is a post-apocalyptic science-fiction story about a world immersed in amnesia. The production was appreciated, among others at festivals in Boston, Buenos Aires, Chicago, London or New Orleans. The filmmakers, director and co-creator of the screenplay Claire Carré and the screenwriter Charles Spano talk about working on the film and how Embers explores the relationship between memory and identity.

Some memories from the making of a film:

The somber, pervading silence while exploring the decaying ruins of a church as snowflakes fell through the hole in the roof onto the platform where the altar once stood.

Descending an unlit concrete staircase to shoot in the network of dark tunnels, 100 feet below the surface, at the MRU World War II bunkers in Poland.

Shooting in the middle of the night in a desolate parking deck, the scene lit only by signal flares and flickering fires.

We shot Embers, our first feature film, in 2014 and toured festivals the following year. It was released theatrically and streaming in 2016. Watching it now, it’s not just a science fiction movie, but a record of that time – an artefact of moments that otherwise live in our memories. Not just awe-inspiring locations or challenging shoot days, but little things too: watching the film with the final sound mix for the first time on a big screen in Louisiana. Handing out buttons to audience members as they entered the theater for our International Premiere in Germany. Cooking pasta with the cast and crew at the house we all shared. Singing songs and talking about video games with 7-year-old actor Silvan between takes. Hearing the composers hum an idea for the score.

But "Embers" is a movie about amnesia, and it explores what it would be like to lose not just these memories – but all memories – forever. Embers is set 10 years after a global epidemic has killed most people. The survivors suffer from both retrograde and anterograde amnesia – they can’t remember their past and they can’t form new memories. The film follows five stories of different characters living in this world without memory and explores how we might love, learn, and communicate in a future without a past.

During the writing process, we dove deep into research on memory impairment and amnesia. It was critical for us and for the actors to have a clear idea of exactly what aspects of the characters’ memory would be impacted, and how that might manifest. The “double amnesia” depicted in Embers is a combination of severe anterograde and retrograde amnesia, and it is real. It can be caused by damage to the hippocampal region by communicable diseases such as viral encephalitis.

So what is the difference between the two types of amnesia depicted in Embers? Retrograde amnesia is what people typically think of when they imagine amnesia. The infected cannot access episodic or autobiographical “event” memories except for the oldest and most consolidated ones. The younger characters in the film can remember basic things they knew when they were young children, while the older characters can remember a bit more of their most distant past.

Because our virus specifically affects the hippocampal region, it only damages a specific type of memory consolidation and retrieval. Procedural memory – physical skills – and emotional memory remain unaffected. So someone affected could still swim or ride a bike without even remembering that they know how. Similarly, they can retain an emotional memory – like a strong feeling of affection for someone – without remembering who that person is, or why they feel that way.

Case studies of real-world amnesiacs provided a grounding basis for the representation of amnesia in the film. In particular, we were inspired by Henry Molaison and Clive Wearing. Henry Molaison (“Patient HM”) spent his life as a medical test subject after an extreme surgery in the 1950s that removed his hippocampus and cut out his ability to form long term memories. Despite this, he maintained a positive disposition throughout his life. The relationship between amnesiac Clive Wearing and his wife Deborah is beautiful and profound. In the wake of an attack of encephalitis, Clive’s memory only lasts about a minute. He constantly feels that he is waking for the first time from nothingness. But one thing Clive always remembers is his love for his wife Deborah. If she leaves the room and returns, he hugs her with the passionate joy of being reunited after ages apart. In the absence of memory, his love for her persists, integrated into his emotional being on a level untouched by brain damage.

At its core, Embers is a thought experiment exploring the relationship between memory and identity. Embers takes a real condition and expands it to a global scale: what if a massive epidemic spreads such an affliction to all of humanity? This extreme situation of worldwide amnesia allows us to experience the role of memory in our lives with fresh eyes. We all have a little amnesia. We are all forgetting all the time.

When we watch Embers now, the edit holds ghosts of scenes that were cut from the final film – the teacher playing the guitar, the guardian teaching the boy about phones and cars, the lovers having an argument on a broken staircase. While a scene is on screen, our memories extend beyond the edges of the frame to the crew standing beside us. Hopefully, the experience of watching Embers will seep into your memory – where you were sitting, who you were with, those real-life elements that become entwined with the act of watching a movie at home. 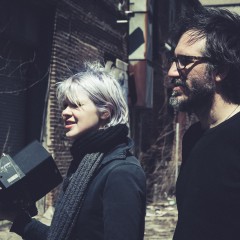 Claire Carré co-wrote and directed "Embers", and Charles Spano co-wrote and produced. The film, which was made in partnership with Papaya and released by The Orchard, was screened at over 50 festivals, winning numerous Best Film and Best Director awards. Carré and Spano are currently working on another science-fiction feature film and are developing a TV series for AMC.