It began with sunlight filtering through the trees. The Japanese call it komorebi. I was spending that July evening sitting out on a porch in the woods. The radio was on and I was sipping tea, lazily gazing as the sun tracked down toward the horizon, cloaking the grasses and branches in a brilliant mantle. I had no chores left; the day was at an end. Grandma was busy working up dinner in the kitchen, while Grandpa was watering the plants. The place smelled of earth, of safety. When Grandpa passed away and I stopped visiting the cabin as often, the memory still kept flooding back, again and again, even in the winter, when the context was wrong.

I tried describing it a couple of times, incorporating it into a story, or even a single line of a poem. Every time, however, I had to admit defeat, as all the words I was able to conjure boiled down to kitschy pictures of sunsets, rutting deers, and old, dilapidated cabins in black and white. To some extent, I felt obliged to mollify the emotions that the komorebi awoke in me. After all, what’s so special about leafy branches dappled with the low, late summer sun? There’s nothing there, Sylwia, come on.

Still, I was emotional and felt weirdly rigid, ossified inside. I didn’t even have to go into the woods—I kept seeing the world suspended in that same peculiar way on summer nights in the city. Delight kept washing over me. I could not pretend otherwise. I kept saying “Ah, that’s so beautiful” over and over again. Even I was beginning to find myself annoying, I sounded like a gushing Anne Shirley but twenty years older.

Still, so many things, big and small, so many phenomena kept delighting me, pleasing me greatly. I kept staring at them, my eyes unable to stay still, stroking their furry skin, photographing them. Kitsch, tasteful form, nature. A book, a landscape, a picture. Whatever. A girl in a dress, a centipede moving down a branch. My insides are moving from one side to the other and I feel bliss. What’s worse, this whole situation seems to be exhausting my analytical apparatus, and given my cultural studies degree I should have been able to come up with an appropriate passage and footnote at the drop of a hat. Dismissing experiences and emotions as either “pretty” or “not pretty” was simply out of the question; this warranted a more profound inquiry, warranted more than merely a tenuous appraisal. And I definitely didn’t shy away from intense emotion. To me, culture is like fast food—fodder to be devoured: three books a weeks, movies, plays, always something down the gullet. I don’t really have time to digest all of these emotions. All I have left are quick stabs to the heart: “Ah, that’s so beautiful.” A quick orgasm and that’s it. No, that can no longer do.

When there’s no way to share what you feel, it gets caught in your throat, already clogged with repeated moans over this beauty and that beauty. And delight needs to be shared. Otherwise, it’ll eat you up inside, too thick and sickeningly saccharine. You can eat a whole cake, true, but that’s risky. That’s why you slice and share it—that’s much healthier. Refusing to share will lead you to a peculiar bulimia, to binging on beauty.

Okay, then, but what do terms such as “pretty” or “beautiful” even mean? Some will see a swan cut from an old tire and set down on a flowerbed as pretty. Others will say that of a Klimt facsimile printed on a vinyl tablecloth. Beauty is relative, Umberto Eco wrote in his History of Beauty. “We talk of Beauty when we enjoy something for what it is, immaterial of whether we possess it or not.” Oh, we can enjoy it for free, how democratic. You don’t have to stick a sunset, a gallery masterpiece, or a melody you heard on the radio in your pocket. It’s there when it’s there—and you get to appreciate the moment of their consumption. The notion of beauty is usually a function of many different culture trends, but beauty itself can be subjective and timeless. Even more—it can be niche and fathomable only to a handful.

Given the breadth of interpretation, we’re still left with emotion, experience. They’re hard to describe: it’s like putting a scent in words, while senses are not necessarily receptive to being transcribed. It’s just as difficult to scrutinize their individual constituent elements, like you would during an X-ray exam.

Let’s take my enchantment with komorebi. I’m already looking for a way out, telling myself that there’s nothing to write about, it’s nothing but your everyday emotional ups and down. The image, however, is simply too powerful, and it seems to have sunk its hooks into me. When I’m cold, I google pictures of sun-dappled forests. I even went as far as to purchase a flask of perfume that would smell like woods in the summer (there’re two on the market), but something kept bothering me about them. They lacked that peculiar brightness, that warmth. What’s beautiful in that picture, you might ask? Some would say: “Well, the nature, the trees.” For most city dwellers, the forest in the summer embodies the fabled benevolence of Mother Earth, pulling us up by shoulders usually burdened with thick slabs of asphalt. The sun—well, that’s kind of self-explanatory. Vitality, enlightenment. A struggle for innocence. Well, maybe I’m simply too taken up with my childhood memories: my Grandpa, his cabin, the carefree routines of summer evenings? What about the feelings that komorebi elicits in other people? Are they as powerful as mine?

Maybe dealing with this slightly kitschy picture of the woods is particularly difficult to me, because I grew up in a punk rock basement and feel closer to pitch black album covers adorned with skulls than I do to the sunny beaches that reggae seems to cherish? Even if my laments over the sun seem nothing but a symptom of senile melancholia, I will nevertheless follow its embarrassing draw with my head held high. My coming outs and outpourings of emotion will be available for everyone to read in my new column—“A Collection of Delightful Events.” And I genuinely hope that at least some of you will take a couple of deep sighs while reading my work, reaffirming my belief that it’s not just some guilty pleasure but a profound yearning for what is Good and Beautiful. 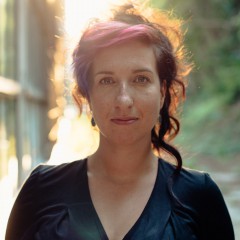 Writer, columnist. PhD at the Institute of Polish Culture at the University of Warsaw. Cultural studies expert, gender studies major with a degree from the University of Warsaw. Social activist and promoter of reading. Recipient of the Polityka Passport, thrice nominated for the Nike Literary Award. Received an Ashoka Social Nobel Prize for her efforts to benefit mothers and the Warsaw City Prize from the Warsaw City Council. Playwright. Her books have been published in nine countries.